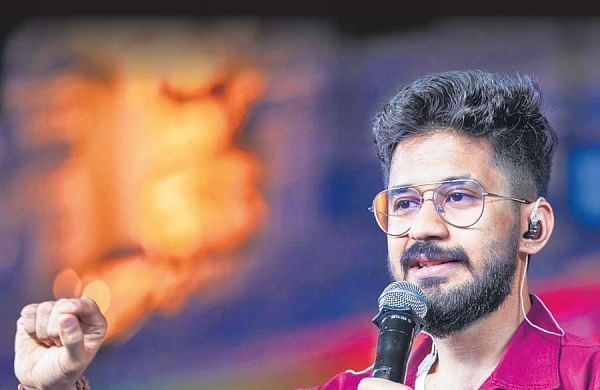 Harikathe Alla Girikathe will bring together composer-filmmaker duo Vasuki Vaibhav and Rishab Shetty for the first time since Sarkari Hi. Pra Shale. The comedy hug directed by Karan Ananth and Anirudh Mahesh has Rishab not only starring but also as executive producer of Sandesh Production.

Vasuki, who has known Rishab from his time at the Kirik Party, finds working with such a multi-faceted personality a joy in itself. “Besides Rishab’s unique directing and acting skills, he is a person who often lights up the atmosphere and divides everyone. This flavor is also reflected in this film,” Vasuki says ahead of the film’s release on June 23. “In the case of HKGK, I only joined the team after filming was over. It was also a different experience,” he adds.

The movie’s trailer was released on Tuesday, and one of the highlights was definitely Vasuki Vaibhave’s soundtrack. The album features lyrics written by Yogaraj Bhat, Satya Prakash, Trilok Vikram and Kalyan. Both singles from the film – Jr. Monalisa and Bawarachi became popular tracks.

Known for bringing a strong emotional connection to his music, Vasuki shares that it’s hard to score music for comedy topics. “Unlike emotional or action movies, you can’t just fill in music for comedic plots. In that way, HKGK was a challenge for me. However, the directors’ contributions helped me do justice to the story. It was also a challenge to compose music for a film that has already been shot. I had to frame the songs according to the visuals, and it was a different experience,” he adds.

Vasuki shares his favorite HKGK song is the highlight track. “The song sung by Tamil singer Pradeep Kumar is close to my heart,” he says. Known for films like Ondalla Eradalla, Churi Katte, French Biriyani and Badava Rascal, Vasuki believes it’s the variety of his discography that has helped him become versatile. “I feel satisfied and happy with what’s happening to me, and I’m glad that people have opened their hearts to different genres,” he concludes.