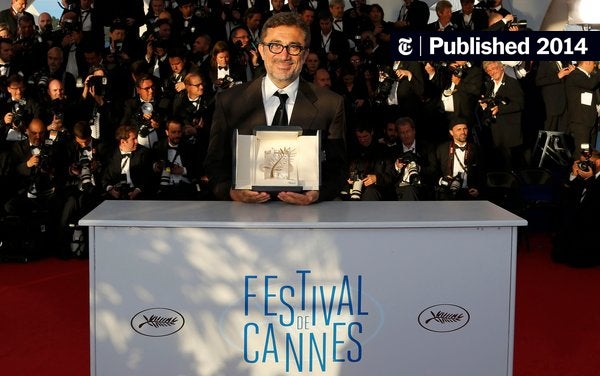 CANNES, France – The 67th Cannes Film Festival closed with restraint on Saturday evening when the Palme d’Or was awarded to the Turkish film “Winter Sleep”. Directed by Nuri Bilge Ceylan, the 3-hour, 16-minute philosophical talkfest about life and death, good and evil, the beauty of the natural world and the art of conversation, had been a favorite among critics in a competition that many considered solid if it lacked revelations.

“It’s a big surprise for me,” Ceylon said in English. “This year is the 100th year of Turkish cinema, and it’s a good coincidence, I think.”

Mr. Ceylon dedicated his Palm to “the young people of Turkey, to those who have lost their lives in the past year”. With the serious deliberation that characterizes his films, he repeated the dedication twice.

French actor Lambert Wilson presided over the ceremony in the majestic Théâtre Lumière, the largest of the event’s headquarters. Jane Campion was chair of the main jury for this year’s competition, which included several other directors and performers who were seated on stage when the winners were announced.

The Camera d’Or, awarded to the best first feature film, was presented by director Nicole Garcia and Gilles Jacob, programmer and long-time president of the festival, which is retiring this year. He was greeted with a sustained standing ovation.

The Camera d’Or went to ‘Party Girl’, a sentimental French film about a middle-aged nightclub worker struggling after deciding to quit working life to settle down with one of her regulars. . “My mother is a party girl,” said Samuel Theis, who was flanked by his co-directors, Marie Amachoukeli and Claire Burger. They were quickly eclipsed by Mr Jacob, who presented Ms Campion with a bouquet – “Jane, you know what you mean to me” – before leaving the stage for a second standing ovation.

The award for Best Actor went to Timothy Spall, who plays JMW Turner in “Mr. Turner,” directed by Mike Leigh. Mr. Spall, who looked stunned (“I’m a little overwhelmed”), explained just four hours earlier, he was on his boat with his arm in a pipe when he received a call telling him to return to Cannes. The award for best actress went to Julianne Moore for her comedy performance as the terribly ambitious Los Angeles actress in David Cronenberg’s latest “Maps to the Stars”.

The screenplay prize went to Andrey Zviaguintsev and Oleg Negin, for “Leviathan”, a beautiful Russian film directed by Mr. Zviaguintsev. The Jury Prize was split between “Mommy”, by young Canadian director Xavier Dolan, and “Goodbye to Language” by Jean-Luc Godard, bringing together the youngest director from the main competition with the oldest.

The award for Best Director went to American filmmaker Bennett Miller for “Foxcatcher,” a true detective story about heir John E. du Pont and wrestling brothers Mark and Dave Schultz. The Grand Prize, presented by Sophia Loren and making it an award for the finalist, went to Italian director Alice Rohrwacher for “The Meraviglie”, a coming-of-age story.

The Palm for Best Short Film went to “Leidi”, directed by Simón Mesa Soto. On Friday evening, the Un Certain Regard prize, a section on the fringes, was awarded to “White God”, an allegorical tale by Hungarian director Kornél Mundruczó about dogs who revolt against their masters.