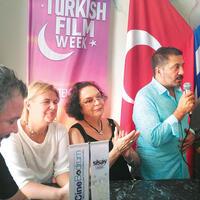 The 8th Bodrum Film Week, organized by the Association of Turkish Cinema Exhibitors (SİSAY), kicked off on September 13 in the western city of Bodrum with a meeting of exhibitors from different cities in Turkey.

During the sessions of the meeting, excerpts from several new films were shown at the Sea Garden Hotel where the meeting took place. Filmmakers Çağan Irmak, Müfit Can Saçıntı and Murat Şeker, whose new films will be screened in theaters in the coming weeks or months, were among the guests of the film week. Some of the actors from the films were also present in the presentations.

The director of Turkish Film Week is Cenk Sezgin, who is also the president of SİSAY. On September 15th, SİSAY held an award ceremony at the Trafo Cultural Center of Bodrum Municipality.

This year’s honorary award went to famous and veteran actress Fatma Girik, who was unfortunately unable to attend the event due to health reasons. The winners Altan Erkekli, Sumru Yavrucuk and Bahar Öztan received their prizes on stage. The other winners, Ayşen Gruda, Timuçin Esen, Erkan Can and Zerrin Tekindor, were unable to participate due to their work.

At the ceremony, producer Mustafa Uslu, who achieved huge box office success with his film “Ayla”, presented clips of his new productions – which will be on screens in the coming months – “Müslüm”, “Turkish-i Dondurma” and “Çiçero.”

Bodrum Turkish Week has extended its program to the Greek island of Kos, the hometown of Hippocrates, as it did last year. Previously, the island of Rhodes was slated as one of the film week’s venues, but the election of a new mayor postponed this cooperation until the coming year. Film week guests were taken to Kos and events on the island began on September 16 with a press conference attended by the Deputy Mayor of Kos, representatives of the Turkish Istanköy Association and members of the press.

Screenings of 10 mainstream films were made at the Cinemarine cinema in Bodrum, as well as several open-air screenings, as well as at the Orpheus cinemas on Kos. Screenings will continue until September 21 in both cities.

The organization of Sezgin and his team was precise, excluding pompous shows and focusing on the necessary elements of a cinematic event. It is also a remarkable attitude not to call the event a “festival”, but to call it “film week”.

Screenings and meetings in Turkey and Greece can lead to new cooperation in the cinematographic sector, as well as to broaden the field of understanding between the peoples of the two countries.