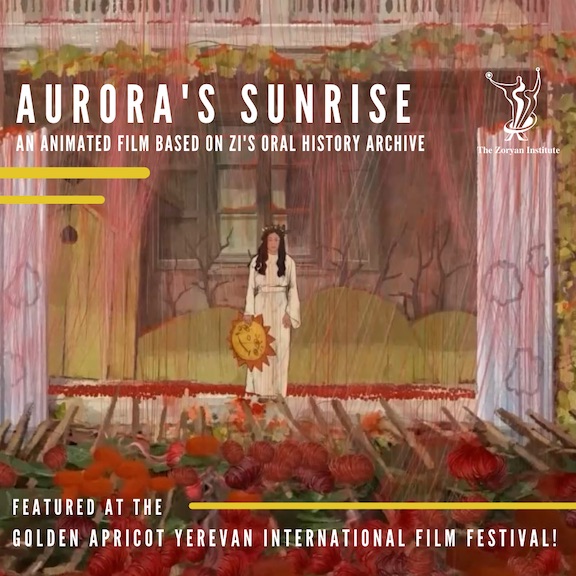 YEREVAN—The Zoryan Institute has announced that “Aurora’s Sunrise,” an animated film, has been screened in the international competition of the 19th Golden Apricot Yerevan International Film Festival. The film was screened on July 14 at 12:30 p.m. and 8:00 p.m., in Yerevan, Armenia.

“Aurora’s Sunrise” is a historical animated documentary film about the life of Armenian Genocide survivor Aurora Mardiganian, who shared her courageous story of survival with the world, raising millions of dollars in humanitarian aid for survivors after the genocide. The Zoryan Institute’s goal with this animated film is to bring the story of an incredible survivor from its collection of oral histories to life on the big screen, to empower young women and girls to portray their communities in the face of great adversity and violence.

Atom Egoyan, honorary president of the Festival, said this about Aurora in the preface to the 2014 edition of “Ravished Armenia and the Story of Aurora Mardiganian”: “What makes Aurora a super survivor is that she not only witnessed the elimination of her family and her community, but also inspired a dramatic account of this experience…Aurora lived the experience of genocide, lived the experience of carrying out a film about the genocide, and then witnessed the effective disappearance of both events – one by the denial of the perpetrators, the other by the physical laws of the film itself.

Nearly 40 years ago, the Zoryan Institute made an investment to conduct interviews with Armenian Genocide survivors with technologies considered ultra-modern at the time: video recording. This medium not only captured the voices of the survivors, but also their presence, expressions and raw emotions. It was the first oral history project to do so, and it made a huge contribution to preserving an invaluable part of the experience and history of the Armenian people. The animated film allows the public to visualize all the elements confined to the imagination when viewing these recordings. Seeing the Genocide experience unfold on the big screen will make Aurora’s incredible story eternally accessible.

“Aurora’s Sunrise” isn’t the only film based on and using the Zoryan Institute’s oral history archive. The 1988 PBS hit, “An Armenian Journey,” by award-winning documentary filmmaker and former Zoryan Institute president Theodore Bogosian, features 70-year-old Mariam Davis, who returned to eastern Turkey to the first time since she was 10 years old. Mariam Davis was the very first survivor of the Armenian Genocide whom the Zoryan Institute had the pleasure of interviewing for its Oral History of the Armenian Genocide program in 1983.

Discussing the impacts of “An Armenian Journey”, Bogosian said: “Millions of PBS viewers (watched the film) in its first week of April 24, 1988. An Armenian Journey broke Turkish taboos… Without the program of Zoryan’s oral history, the film wouldn’t have the same sound of truth, and it might never have aired.

Zoryan Institute board member Dr. Rouben Adalian, who interviewed Aurora in 1984, concluded a recent interview with the Zoryan Institute by stating, “[Aurora] was clearly someone who already knew how to tell his story. She taught us, and me personally, that as a researcher you can be armed with all kinds of questions, to try to present the facts in a scientific way, but a survivor with the energy and personality of Aurora could tell his story in his own way, and our obligation was to listen more than ask questions…”

“I think it’s the spirit of Aurora, her energy, her ability to share her story…that now [led to this film] that future generations can analyze and find inspiration in history that previous generations may not have noticed,” said Dr. Adalian, commenting on the incredible legacy that Aurora passes on to future generations and shares now. with the rest of the world.

“It’s Aurora’s legacy. This is the value of this interview. It was the unprecedented and important contribution that the Zoryan Institute made when I sat down with this survivor, as with many other survivors, but in this case, with a woman whose name signified the very dawn that enlightens the fact that about how important it was to talk to survivors and save their stories,” Dr. Adalian concluded.