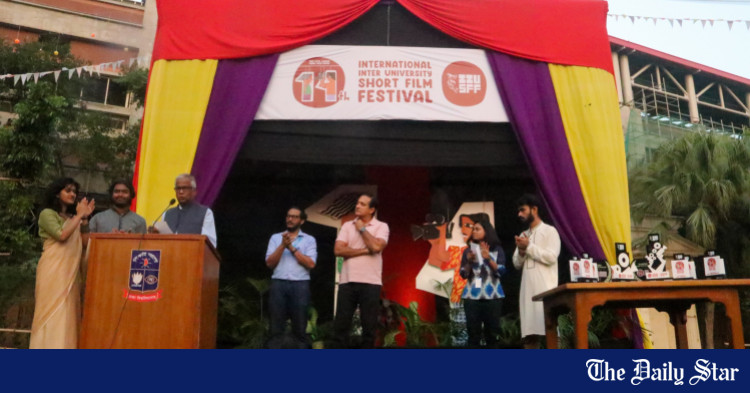 The closing ceremony of the International Inter-University Short Film Festival (IIUSF) was held on November 8 at Star Cineplex, Bashundhara City. The festival is organized by the Dhaka University Film Society.

This year’s event highlighted the voices of refugees to bring global attention to the plight of people in exile around the world. The organizers screened a total of 16 short films, in the category “Short film on refugees”.

For all the latest news, follow the Daily Star’s Google News channel.

The films showcased the genius of young filmmakers from around the world and depicted the stories of refugees in Egypt, Germany, India, Italy, Portugal, UK, USA, Syria, Tunisia and in Turkey.

Among these 170 films, the Zahir Raihan prize for the best short film was awarded to the Turkish film “Larva”. Additionally, the Tareque Masud Award for Best Emerging Director was won by Bijoy B Sarkar for the Bangladeshi short film “The Last Moan”. Seven other films also received awards in various other categories.

Famous activist and film critic, Sadia Khalid Reeti; the famous filmmaker Proshun Rahman and Arifur Rahman were present at the closing ceremony. The cast of “The Last Moan” was also present among the audience.

“Over the years, the IIUSFF has managed to create a name for itself and work as a cross-cultural platform to portray the different styles of young academic filmmakers from around the world. The support we received from the public this year, we will certainly encourage in the future,” said KM Itmam Islam, Secretary General of Dhaka University Film Society.

The United Nations High Commissioner for Refugees (UNHCR) was the festival partner, for the fifth time now, for the 14th edition of this festival.