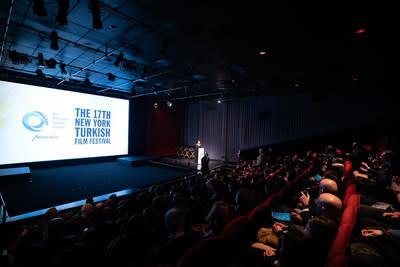 NEW YORK, 23 November 2021 / PRNewswire / – The festival to which CHOBANI is a platinum sponsor, will consist of socially conscious films by various storytellers using art to inspire, enlighten and, above all, entertain.

“Stories Come Together. Storytellers expand our minds and connect us. We are delighted to curate original independent stories that touch our hearts and remind us of the values ​​of our human understanding. We have chosen “Bridges & Borders“as this year’s theme to present films that bridge the gap between cultures, identities and people. These films help us put ourselves in other people’s shoes and allow us to better understand our own species,” said the festival director, Mustafa Kaymak.

The selection of films consists of Eleven unique and original stories that defend new voices in cinema and invite audiences from all walks of life to join us for this four-day celebration. The festival will start with Mimaroglu and screen 10 more amazing films throughout the four days, including Hey there you know it, the criminals, the engagement Hasan, Leylak, the brother’s keeper, the letters from Silivri, Bilmek, the geranium and love, the spells, & All that.

“This year, the film festival experience is enhanced by introducing a hybrid projection model to reach an even larger audience both in person and online,” said the technical director, Scott aharoni.

Each year, the New York Turkish Film Festival showcases groundbreaking works and emerging talent in the independent film world with an emphasis on Turkish origin. This year’s selection includes films that were official selections of Cannes, Berlin, Sundance and Tribeca Film Festival.

Founded in 1949 by a group of visionaries, the American Turkish Society is the oldest American institution dedicated to building bridges between United States and Turkey. Celebrating its 18th year, the New York Turkish Film Festival (NYTFF) has grown into one of the premier film festivals in new York. Showing over 300 films and reaching over 25,000 spectators, the New York Turkish Film Festival brings the best of Turkey the film industry in New York.

For more information on timetables and tickets, visit https://nytff.eventive.org/schedule