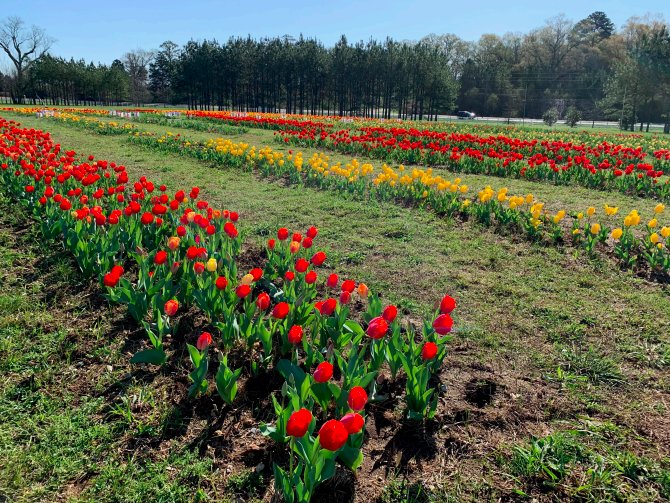 The 6th Annual Tulip Festival held at the American Village in Montevallo will open on Saturday March 5th.

Since its debut in 2017, the festival has drawn large crowds, and last year’s attendance was over 7,000.

Workers began preparing the tulip beds last November and planted bulbs in early December, of which 2,000 bulbs of forty different varieties were planted.

Visitors can stroll among the rows of colorful flowers, take photos and pick flowers and bulbs to take home. The field of over 80,000 tulips, with replicas of some of America’s most historic locations as a backdrop.

In addition to learning about tulips, visitors can participate in colonial games, meet patriots of the past, see the Continental Army encampment, the Colonial Chapel, the Randall Museum, and the National Veterans’ Shrine.

The newly opened West Wing of Independence Hall will feature an original film “Choose to be an American people.”

Admission is $5, and children 4 and under, veterans, and active military are free. Tulips can be purchased for $2 each plus tax, bulb included. American Village beverages and merchandise will also be available for sale at the Tulip Field.

The Tulip Festival opens Saturday, March 5 and will be open from 10 a.m. to 4 p.m. and Sunday from noon to 4 p.m. The event will continue throughout March and times and information will be updated at americanvillage.org.