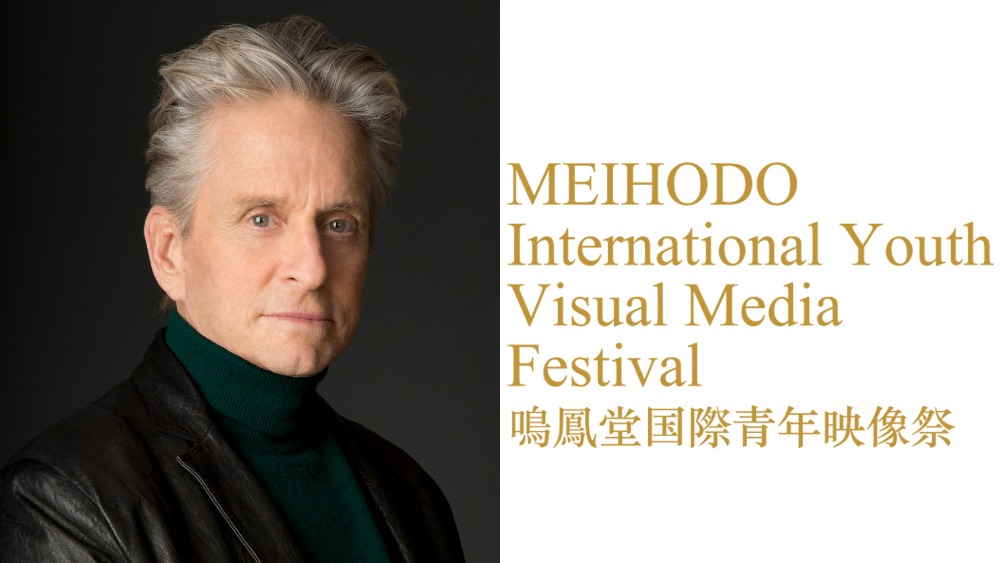 Oscar-winning actor and filmmaker Michael Douglas will be the guest of honor and advisor of the fourth edition Meihodo International Youth Visual Media Festival. Douglas will appear at the 2022 Short Film Festival Virtual Awards Ceremony to announce the grand prize winner and offer insight for young filmmakers. The ceremony will be hosted via Meihodo’s Japan-based US headquarters in New York and will be streamed on YouTube for US audiences on February 22.

The theme of this year’s festival will be “Dreaming Big in the Digital Revolution”. The festival received thousands of entries from all over the world, and Meihodo will introduce a new element, rewarding the top winners with personalized NFTs and cryptocurrency and awarding a prize of $20,000 to an outstanding work, with a total prize exceeding $100,000.

“I’ve been fortunate enough to work in the film industry for decades, and I’m both honored and thrilled to meet young filmmakers at the fourth annual Meihodo Festival,” Douglas said. “From a very young age, thanks to my father, I have had a front row seat to watch films being made and it is a pleasure not only to share some of this wisdom, but also to learn from a new wave of artists.”

The festival’s special advisor is the Oscar-winning composer of “Crouching Tiger, Hidden Dragon” Tan Dun and the honorary president is an acclaimed producer Yue Sai Kan.

Banijay Iberia named miguel martin as the new general manager of his label Zeppelin, replacing Amparo Castellano. Zeppelin’s recent hits include “Secret Story”, “Big Brother”, “The Bridge and SKAM España”. Martín began his tenure at Banijay Iberia in 2019 at the Banijay Birds IP Development Center and has also served as an executive producer on local titles including “LOL: Last One Laughing” for Amazon Prime Video. He has also directed and produced shows in several genres. The executive also has experience in the United States, having served as an executive producer on formats for NBC Telemundo and FOX.

During this time, Sivan Pillay was named CEO of the new company Trace Studios, which was formed by Cape Town-based company’s acquisition of Trace Okühle Media Studios. Pillay joined South Africa in 2000 and became Managing Director in 2008. He was appointed CEO of Endemol Shine Africa after the global Endemol-Shine merger. After his Endemol years and until the end of 2021, Pillay was the founder and CEO of 360 Degrees South and Zero Gravity TV and Media where he developed over 40 TV formats that will be part of the Trace Studios catalog of formats.

BBC Studios and Pastel film adapt Sally Wainwright“Happy Valley,” the BAFTA-winning drama for Turkish audiences as “Son Nefesime Kadar,” is the first time it has been remade for international audiences. Acclaimed actor Nurgul Yesilcay stars as Catherine Cawood, a no-nonsense small-town police sergeant whose world is turned upside down when the man she believes is responsible for her daughter’s death – Tommy Lee Royce – is released from prison. Emre Bey plays Royce, with Emre Kinay playing Catherine’s ex-husband Richard Cawood and Ertan Saban as the new character, Vedat.

Adapted by Hatice Meryem, whose previous works include local adaptations of “Shameless” and “Desperate Housewives”, the series is currently in production in Istanbul. It is produced by Yaşar İrvül and Efe İrvül and directed by Deniz Çelebi Dikilitaş. It is expected to air on the free FOX channel in the coming months.

Tribeca Film Festival selection and Nashville Film Festival The grand jury-winning film ‘Brian Wilson: Long Promised Road’ is now out in UK cinemas. The musical documentary explores the life and career of the legendary beach boys musician Brian Wilson, through a literal and metaphorical road trip to discover his hometown. 2022 marks the 60th anniversary of the Beach Boys. The film features 36 of Wilson’s most iconic hits, including “God Only Knows”, “Good Vibrations” and “Wouldn’t It Be Nice”, rare tracks, unreleased demos and his home movies and personal photo albums.

In addition, Bruce Springsteen, Elton John, Nick Jonas and Taylor Hawkins share the impact Wilson has had on their careers. The documentary is directed by the filmmaker “Streetlight Harmonies” Brent Wilson (no relationship).

“‘Long Promised Road’ is a loving and satisfying film, sometimes sentimental but often insightful, a collection of accurate testimonies of Wilson’s artistry by authoritative fans like Springsteen and Elton John, and a film that leaves the enchanting qualities of Wilson’s music cascades over you,” wrote Variety criticizes Owen Gleiberman in his review of the film.