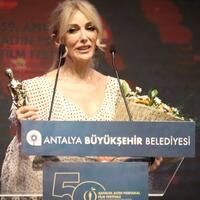 After the traditional procession in the city, the 59th Golden Orange Film Festival, organized by the Antalya Metropolitan Municipality with the contribution of the Ministry of Culture and Tourism, kicked off on October 1 with a ceremony held in the southern province of Antalya.

During the opening speech of the event, Mayor of Antalya Muhittin Böcek said: “Golden Orange means cinema, Yeşilçam. Golden Orange means loyalty to Cüneyt Arkın, Fatma Girik, Tarık Akan, Kemal Sunal and many other artists whose names I cannot count, whose films I played at Konyaaltı Beach with the film machine I have bought when I was young. The light reflected by this machine, which allowed me to create a mobile outdoor cinema, has illuminated my life during these years and continues to do so.

Culture and Tourism Minister Mehmet Nuri Ersoy said cinema is important in keeping history alive and bringing it alive in the present, adding: “To have a stronger cinema today and tomorrow, we need to know what was done yesterday and transmit this experience to the present. Just as it is not possible to think of contemporary Russian cinema independently of Tarkovsky, French new wave cinema and Italian cinema of Fellini, we must understand our own roots in the most precise way.

Ersoy also said that the ministry has supported many films to participate in the festival, adding, “We are very happy that the international recognition of the festival is increasing every year. This festival has another important mission. It also plays an important role in memorizing artists’ names and passing them on to future generations. If we lose our cinematic memory, then the real danger begins. These names are an example for future generations and artists. As a ministry, we support and support all kinds of cinema-related activities, especially this festival.

As part of the literary adaptation script competition, organized for the first time this year within the framework of the festival, Elif Refiğ and Murat Mahmutyazıcıoğlu received the special jury prize with a monetary prize of 40,000 Turkish liras, while Burcu Aykar won Best Screenplay with a cash prize. prize of 80,000 lire in this contest.

This year, 66 films by 74 directors from 33 countries will be screened at the festival in AKM Aspendos and Perge halls, Doğu Garajı Cultural Center, under 1 stars in Karaalioğlu Park and under 2 stars behind AKM Doğan Hızlan Library. The films will be screened in two sessions, at 7:30 p.m. and 9:45 p.m.

Festival tickets are on sale at Biletix.com and at Biletix ticket offices at AKM. The national screenings of short films and documentaries which will be screened at the AKM Perge cinema will be free of charge.