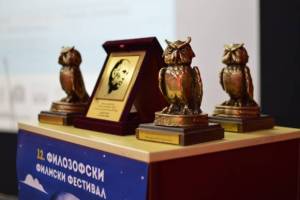 The award ceremony at North Macedonia Cinematheque was followed by a screening of the Turkish/French/German/Dutch co-production something useful by Pelin Esmer, followed by a discussion with the director.

The Philosophical Film Festival is a film festival at the crossroads of philosophy and cinema, which tries to promote the idea of ​​film as a medium that can provoke philosophical thought and illustrate philosophical ideas. The festival screened 40 films, organized around 50 events and welcomed 20 national and international guests.

The festival is organized by the Macedonian Philosophical Society.