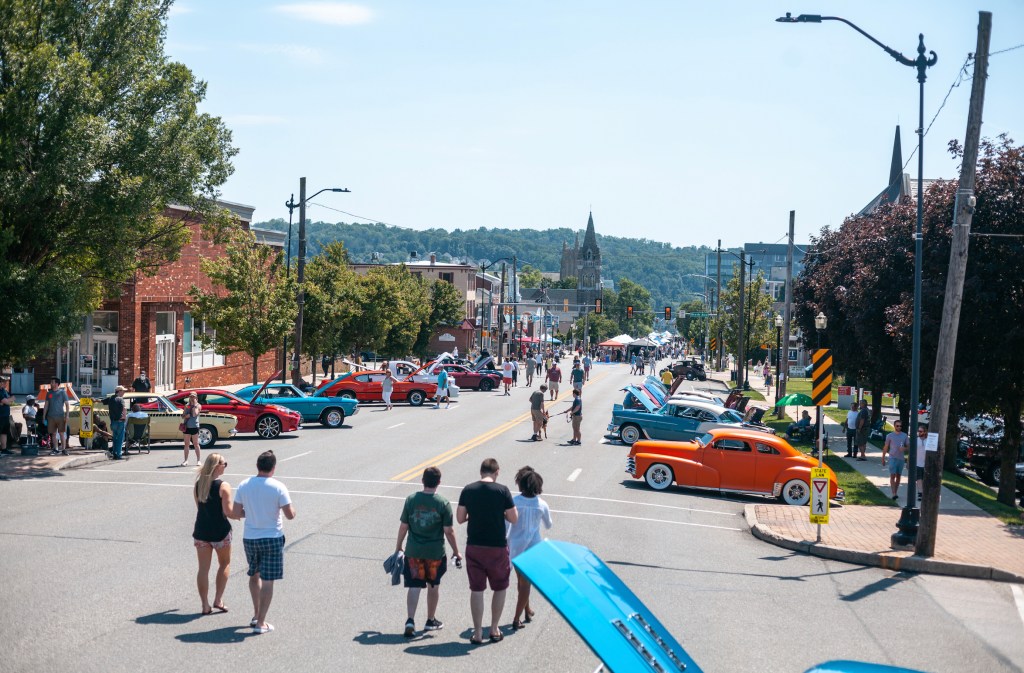 CONSHOHOCKEN – A banjo that started out as an eyeball? A nose that was once a kite? Words don’t do justice to the twists and turns on the striking 24″ x 30″ canvas, local artists Kathy Bampfield, Fran Barone and thirty random creatives recently brushed from blah to beautiful. But the finished product – a boldly brilliant abstract – is currently attracting many eyes at Conshohocken’s Artists Loft, 14 E. Fifth Ave. Auto showroom.

Bidding started at $100 with all proceeds going to the Conshohocken-based Colonial Neighborhood Council…as is revenue from the sale of 8″ x 10″ print versions at $35 each. Admittedly, the colorful original is unlikely to snag the record $195 million that Andy Warhol’s iconic “Shot Sage Blue Marilyn” recently won at Christie’s auction in New York. But CNC runs several assistance programs for residents of Conshohocken, Plymouth and Whitemarsh on a shoestring budget. So, as Executive Director Sandi Fryer says, “All donations are greatly appreciated.”

Bampfield-Barone’s collaborative piece is just one example of what awaits visitors to the annual Conshohocken street fair. The rally will take over Fayette Street from 11 a.m. to 4 p.m. (rainy date June 11) and benefit the Conshohocken Art League as well as community events sponsored by festival host Destination Conshohocken, a nonprofit organization non-profit led by borough mayor Yaniv Aronson to support “charity, volunteer services, community engagement and promotion of the arts.

This year’s vendors will offer everything from original paintings, prints and photographs to handmade crafts. Bampfield-Barone’s painting came together when the two – both members of the Greater Norristown Art League and regular exhibitors at the Artists Loft – invited passers-by and Loft passers-by to add their visual perspectives to a then-blank canvas.

“The idea was to create a community canvas to benefit the CNC, which does so much for the community,” says Bampfield. “We had something like 25 people working there… all ages, from a two-year-old to someone in their 90s. Everyone’s (contribution) was different. For example, the eyeball that someone else turned into a banjo… and the kite that turned into a nose. Then we had this guy who wrote the word Conshy on it, which changed his whole trajectory.

Aronson thinks this year’s festival “should be our best year yet.”

“At this point, we’re ahead of auto show registrations and salespeople,” he says. “What makes our car show different is that it’s a community show open to anyone who wants to show off their vehicle. We award 25 plaques and four trophies, including a Best of Show. But I spend a lot of time chatting with people about what makes their car special, and I give a Mayor’s Choice trophy to someone who tells me an interesting story about… their car. Glenn Quinn (the show’s director) awards the Mustang Mom Mom Trophy in memory of his late wife, Karen, and we also have a Worshipful Master’s Choice Trophy. I think it’s awards like these that make it unique.

Registration for the car show begins at 8:30 a.m. and closes at 10:30 a.m. Registration (at www.ConshohockenArtsFestival.com) is $15 before the event, $20 at the festival, and includes a t- shirt. Additional information is available by email at [email protected], by phone at 610-937-6018 or on social media.

As usual, the many restaurants in the borough will offer plenty of lunch and snack options both indoors and outdoors. Gift certificates for Conshy Girls Restaurant Group and Eat Greek restaurants are also prizes in a First Lady raffle. The main sponsors of the 2022 festival are Product Investigations, Inc., Conicelli Autoplex and Ashley’s Conshohocken.