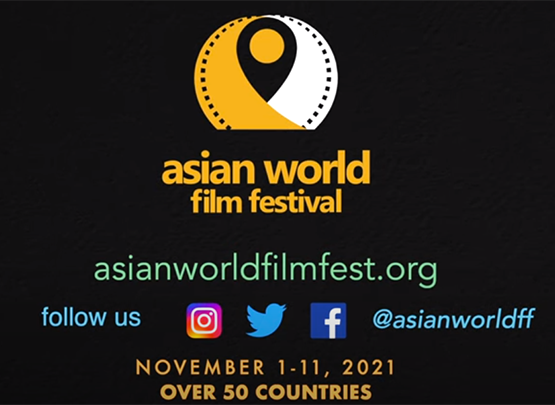 The 2021 Asian World Film Festival (AWFF) today announced its lineup of virtual and in-person panel discussions. A diverse group of experts, from producers and studio directors to casting directors and talent, will discuss how streaming and globalization are transforming content around the world, with a focus on Asia as pioneer. In addition, members of the Hollywood Foreign Press Association (HFPA) will participate in a session on the future of their organization. The AWFF Industry Forum will take place on November 3, virtually, and November 6, in person, at Landmark Theaters, West Pico Blvd, Los Angeles. Registration and more information here:

“Our AWFF panels will bring together a diverse group of filmmakers and experts to share their thoughts on the creative process, international casting, vibrant Asian markets and a host of other topics,” said Rick Ambros, international consultant and producer in media and entertainment. . “This is a unique opportunity to hear a wide range of voices on topics of concern to Asian and global film communities. “

GLOBAL STREAMING AND THE FUTURE OF ENTERTAINMENT IN ASIA
9:00 a.m.

Global streaming has changed the consumption, distribution, financing and production of entertainment across the world, and particularly in Asia, where international OTTs scramble to tap hundreds of millions of new potential customers. As content in international and local languages ​​increasingly travels the world, digital media companies from the United States, China, India and across Asia will take center stage. Join us as we learn about everything from the effects of COVID and SVOD vs AVOD, to what it all means for the independent filmmaker and creator of ‘TV’ content. Produced in association with the American Film Market (AFM)

Leaders across the African landscape are increasingly finding their voice and claiming the claim of their people in the courtesy of nations. Hear filmmakers, businessmen and scientists talk about their vision for the African continent, nations and communities, and the role filmmakers can play in shaping and shaping that future.

What’s next for the Hollywood Foreign Press Association?
11:45 a.m.

Join key members of the Hollywood Foreign Press Association (HFPA) to discuss their organization’s mission and role, recent reforms, and the future of the Golden Globes, the HFPA’s annual film and television awards show.

Filmmakers and talents talk about the creative process
2:00 p.m.

A panel of established and emerging directors and actors examine the creative process behind their AWFF films and examine the challenges, opportunities and trends that filmmakers face in producing content in their regions.

How has the growth of global content changed the cast?
3:30 p.m.

Top Casting Directors, Managers and Agents shine a light on the process of casting international talent based in the United States on films for global audiences. They will delve into the impact of local language and content release management and examine the unique opportunities and challenges that Asian and Asian American players face today.

About the ASIAN WORLD FILM FESTIVAL (AWFF)
The Asian World Film Festival (AWFF), founded by Kyrgyz public figure Sadyk Sher-Niyaz, brings to Los Angeles the best of a wide selection of cinemas from the Asian world in order to better recognize the wealth of filmmakers in the region and to strengthen ties between Asian countries and Hollywood film industries. Uniting through intercultural collaboration, the Festival defends films from more than 50 Asian countries, from Turkey to Japan and Russia to India and the Middle East. All participating films have the unique opportunity to be guided through the tough awards season. They are also presented to members of the Motion Picture Academy, the Hollywood Foreign Press Association, and Entertainment Guilds for better exposure, media attention, and consideration for awards. AWFF is a non-profit organization under Aitysh, USA.