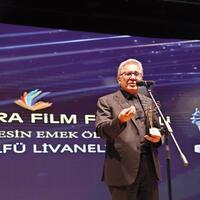 For the first time this year, the festival awarded the Foundation’s Special Prizes to actress Farah Zeynep Abdullah and producer, director and screenwriter Ceylan Özgün Özçelik.

The ceremony ended with the Livaneli Songs concert by the artists of Ankara State Opera and Ballet.

The 33rd Ankara Film Festival will continue until November 11 at Büyülü Fener Kızılay Cinema. As part of the festival, a total of 76 films will be screened under the titles including National Competitions, World Cinema and Special Screenings.

The festival prizes will be awarded in 12 categories, including the Best Film Award of 50,000 Turkish Liras in the National Feature Film Competition category and the Mahmut Tali Öngören Best Debut Film Award of 20,000 Liras awarded to first films.