A story set in Syrian Kurdistan 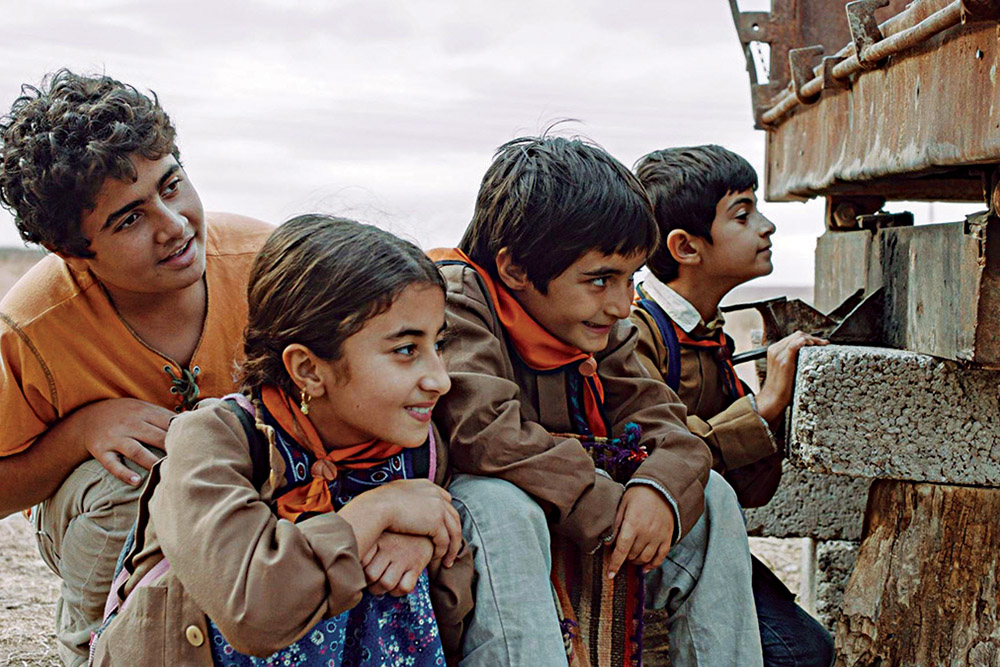 In an interview with a British newspaper, director Mano Khalil said: “The mere fact of saying that I am a Kurd is a political act.

Khalil grew up in a Syrian Kurdish mountain village near the Turkish border when Hafez al-Assad was president. He has lived in Switzerland since 1996. Previously he studied history and law at the University of Damascus and moved to Czechoslovakia in 1987 to study cinema. Between 1990 and 1995 he worked as a freelance director for Czechoslovak Television and then for Slovak Television.

At the height of pan-Arab nationalism under the regime of Hafez Assad, Syrian repression against their Kurdish minority included government-ordered land seizures, forcible population transfers, imprisonment and torture.

Khalil explores central themes of the Kurdish experience in his latest feature, ‘Neighbours’. The film will premiere in person March 29 at 7:30 p.m. at the Evelyn Rubenstein JCC; also, virtually, between 8 p.m. and 11 p.m., March 29. (A link will be emailed after registration.) “Neighbors,” in Kurdish and Hebrew with English subtitles, is part of the Houston Jewish Film Festival.

Although the film opens in a Kurdish refugee camp in Syria, the story is told in a flashback 40 years earlier through the eyes of Sero at the age of 6.

Sero’s neighbors, Nachum, his wife and daughter are Jewish. The families are close.

As the village has no electricity, Sero lights his neighbour’s kerosene lamp
Friday evenings. For Sero, the lack of electricity in his village prevents him from watching cartoons on television. He knows about Nachum’s wife when she berates her husband for not leaving the village. “We are going to die staying here,” she warns.

Sero’s life is turned upside down when a new teacher arrives at the village school. The teacher announces that he will teach the students Arabic, a foreign language for Sero, who only understands Kurdish. The teacher’s goals are to indoctrinate children in Syrian unity, freedom, socialism, love for “our eternal leader Hafiz Assad” and hatred for “the Zionist entity”.

Such concepts are beyond the consciousness of 6-year-old Sero. As Henry James wrote, “Little children have many more perceptions than they have words to translate them; their vision is at every moment much richer, their apprehension even constantly stronger, than… their vocabulary not at all producible.

The Syrians arrest and assassinate Aram. Sero’s father helps Nachum’s wife and daughter escape Syria. And in this movie, unlike real life, the professor gets his bounty.

At the start of the film, Sero, in his forties, says in voiceover: “In the village, there are no secrets, only stories. This sentence is very similar to the one that opens Ariel Sabar’s memoir, “My father’s paradise”: “I am the keeper of my father’s stories. I am the guardian of his honor… As the eldest son of a Kurdish Jewish father, such are, they tell me, my duties.

Neither the Kurds nor the Kurdish Jews left much written history. It is the storytellers who have transmitted oral culture and history through the generations.

Today, discrimination against minorities is common in almost every country in the Middle East. Kurds lived in what is now Turkey, Syria and Iraq – long before Islam, pan-Arabism and Turkish nationalism. Jews mostly fled the Middle East with the exception of Israel.

Tensions between Muslims and Christians are still apparent in many countries, including Egypt and Lebanon. Many Sunni clerics, such as Wahhabis, label religious minorities such as the Shias, Baha’is and Yazidis as heretics, justifying and even encouraging violence against them.

Even when “Neighbours” tells stories of repression and murder, director Khalil maintains a touch of levity. His Baathist teacher is didactic. Khalil never is. The movie is full of characters you wouldn’t expect to meet. And, there are many good stories in this small village.